Creative directors or curators of exhibitions at the Venice Architecture Biennale are expected to respond to the theme set by the Biennale’s director. In 2014, the Biennale director was celebrated Dutch architect Rem Koolhaas.

Koolhaas accepted the role on the condition that ‘his’ Biennale be extended to almost six months. The title Koolhaas gave the Biennale was “Fundamentals”, as in getting back to basics. In this spirit, Koolhaas’ own curated exhibition in the Giardini was called “Elements of Architecture”, and was, it eventuated, a jam-packed presentation of architectural componentry (door, window, roof, fireplace, etc.) – a compendium that suggested the high-priest of the avant-garde might be an eighteenth century encyclopedist at heart. 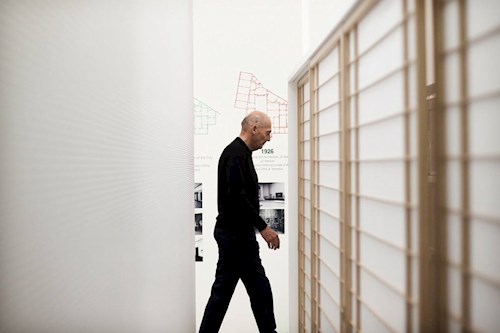 Koolhaas had another, particular theme intended for the creators of national pavilions: “Absorbing Modernity: 1914-2014”. This is the topic the national pavilions had to address (and most did – a testament to the coherence Koolhaas imposed on the 2014 Venice Architecture Biennale). Koolhaas wanted national exhibitors to consider the effects of modernity on the architecture of their countries over the past century. He asked exhibitors to consider what has been lost – “the erasure of national characteristics” – and what may still be found – “the survival of unique national features and mentalities”.

Koolhaas asked large questions, which are not without their ambiguities. Is modernity synonymous with modernism, the dominant architectural and cultural movement for much of the twentieth century? Is it another word for modernisation, which most countries have embraced, by choice or necessity, at some time over the past hundred years? Or does it just mean modern times, which renders the term rather tautological?

Most national exhibition curators and creative directors interpreted Koolhaas’ theme as a prompt to look at the relationship, in their countries, between local traditions – cultural as well as architectural – and modernism, which became the global architectural lingua franca in the twentieth century. Is modernity (and modernism/modernisation) compatible or incompatible with national styles or approaches to architecture? How was modernism – a European phenomenon – realised around the world? Does modernity mean homogeneity? In a time of globalisation is the “where” of architecture increasingly irrelevant?

Background to the 2014 Exhibition

David Mitchell’s proposal ‘Last, Loneliest, Loveliest’ was chosen by the jury to be the New Zealand exhibition.