Heritage buildings in Palmerston North, Stratford and Whanganui and buildings that support New Plymouth’s energy industry have been recognised in the 2019 Western Architecture Awards.

The Awards, which were announced at an event in New Plymouth, are part of the nationwide New Zealand Architecture Awards programme run by the New Zealand Institute of Architects (NZIA) and supported by Resene.

Through the awards, the NZIA aims to demonstrate the contribution of high-quality architecture to the development of New Zealand’s cities, towns and communities

“Our region has a number of architecturally significant homes that have lasted well and are still providing good service after many years of occupation,” Spiers said. “It has been satisfying to acknowledge these older buildings and also to visit heritage buildings that have been strengthened and repurposed for many more decades of use.”

Spiers said one awards highlight was Fenton Street Art Collective, a Housing–Alterations and Additions winner. Designed by New Plymouth practice Boon, the two-storey, 1920s building in Stratfordwas unused and run down until 2017, when a process of restoration began.

“Today, it is a bustling, flexible and contemporary space that meets a range of new uses, including café, boutique distillery, writer’s den, office space and open-plan loft home.”

The one Western Architecture Awards winner is Fenton Street Art Collective, a Housing–Alterations and Additions winner. Designed by New Plymouth practice @boonteamarchitects, the two-storey, 1920s building in Stratford was unused and run down until 2017, when a process of restoration began.⠀ .⠀ “Today, it is a bustling, flexible and contemporary space that meets a range of new uses, including café, boutique distillery, writer’s den, office space and open-plan loft home,” the jury said.⠀ .⠀ #westernarchawards2019 #nzarchawards2019 #nzarchitecture #newzealandarchitectureawards #architecture #nzia @resenecolour #fentonstreetartcollective photo: Sandra Henderson

The jury gave Architecture HDT a Hospitality Award for the skilful design of Little Savanna, a restaurant and bar within a Palmerston North heritage building that is now a “local attention grabber.”

Two projects won Enduring Architecture Awards, which are given to awarded to buildings more than 25 years old which have stood the test of time and still perform valuable service.

One Enduring Architecture Award went to the McCallum House (1965), the home of architect Don McCallum. The house is located in the Turere Place Modern Houses Precinct – a Whanganui cul-de-sac notable for architecturally significant modernist dwellings.

“Using a modest, modernist vernacular – steel framing, concrete block walls, and ample glazing – the architect established a house that sits easily in the landscape and enjoys a close connection to its surrounds,” the jury said.

“It has a strong and clear form,” said the jury. “The robust materials of the building’s construction have lasted well to provide generations of students with memorable, homely spaces.”

“This building works hard to be more than just a workplace, with staff facilities, including the cafeteria, taking pole position in the plan to gain the best views and outdoor access,” the jury said.

“The campus-style workplace is designed to connect and engage staff in a comfortable and productive environment”, the jury said.

The St Georges Guest House, located in Okato, accommodates the client’s extended family and friends, and “confidently starts an architectural dialogue with the existing house on the site and provides a well-used courtyard for welcome shelter from prevailing winds”.

Ardern Peters Architects second award was for McC House, in Lepperton, which “references a ‘rural vernacular’ through simple forms and material selections”.

The jury said the Clark Residence in Palmerston North is “well-executed, compact, and energy efficient”, the jury said. “There is much to like about this house built on a small rear site. 242am Architects has worked hard to meet the client’s ambition of saving as many existing native trees as possible, integrating seamlessly with the landscape, and leaving a small carbon footprint.”

AB Studio, by Copeland Associates Architects, received a Small Project Award. The Taihape building is a “delightful, cleverly designed compact studio positioned on an elevated site to take advantage of views and light”, the jury said. 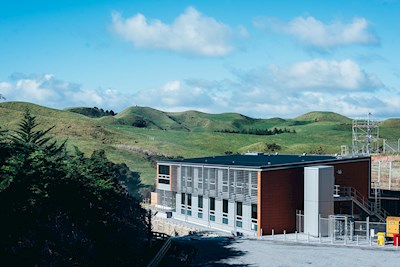 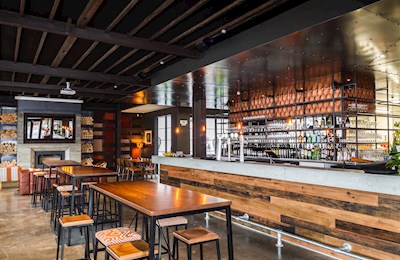 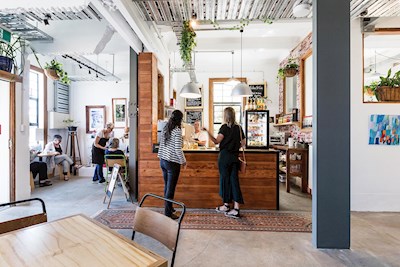