Janis Marler and Blair Harkness live in a red house in the West Auckland bush designed by Ken Crosson from Crosson Architects. Janis shares her insights into their building experience.

Why did you choose to use an architect?

I would never build a house without an architect. If you want the house facing the right way, taking full advantage of the environment, then you have to have an architect. It’s a no brainer. I know it adds to the expense but at the end of the day you get something which is worth having. For us to be able to live here we’ve got to have the right house.

How did you find your architect?

We had an initial architect design for further down in the valley. It’s the very lowest part and so we had a design with a different architect which entailed a great big steel structure, a wee bit like Bean Rock. They just shot straight up and we were going to have to walk across to the garage site. It cost $100,000 just to get the resource consent. We had to give that away. So then we were thinking much smaller and we were thinking of the garage site because it’s a teeny tiny footprint.

The other house was a very modest house. It was only a three bedroom house but it just had to go up really high. Then we went back to the garage site and we thought well let’s try there and we’d seen Ken’s (Crosson, the architect) little Omaha beach house and thought well, we could live in that.

So we trotted off to Ken cap in hand saying we have a very small budget would you be interested. He said there’s no way you can live in 45 square metres permanently. So up we went. The house now I think is about 95 square metres in total. We were really impressed that Ken was even interested, which tells you something about the perception of architects. But we would never have built without an architect ever.

So what were your prerequisites?

We did have some prerequisites we discussed in the first briefing. One of the most important ones was the roof deck because, having lived in such terrain before, there was no point in having a deck here and a deck there and there because it’s never going to happen. You’ve just got a whole lot of leaves hanging about and you’re never on that flat part of the land. You never get the sun at the right time. It’s just an expense of putting all the decking on. So we have a really good little car deck in here. I know they call it something much more elegant in the blurb but I call it a car deck. That gives us quite a lot of sun but the main thing is we have the sun all day. We have the most gorgeous views. The other prerequisite is I wanted a studio space so we have a very small space and that has a nice opaque door which gives lots of light. The bathroom door has a same opaque effect so I don’t have to go round turning lights on. I don’t need lots of light, especially in the bathroom but others do so you have to have both options. But that opaque door is really lovely.

So basically I think the third bedroom is just like a bunkroom which was all we could afford in terms of space and that’s fine. That’s where the kids sleep and we have a tent on the roof in the summer so have four extra beds.

How was communication with Ken and with the architecture firm?

It was straightforward and we didn’t change anything. Michael who worked with Ken was very, very good at being the meat in the sandwich in terms of the build, with the builders and keeping things moving. That is a drama. That would have been enough to put anybody off building. We moved in before the kitchen arrived because we just couldn’t hang out any longer.

So it didn’t go according to the timeline?

Well, no it didn’t, but then I think that it never would.

It helped having an architect help with the contractors?

Absolutely. We wouldn’t have had it any other way.

And in terms of budget, did you go over?

I think we went over but not a lot. It was good, no very good. It was clearly understood right from the beginning that there was a limit and it was adhered to. What really worked well is we didn’t interfere in the build at all because we knew that anything we did like that would change the parameters so I think there may have been a couple of changes the architects made with the main contractor, I don’t know what went on there, but as far as we were concerned we were fine. We could cope with what we got.

Is there anything that you wish in hindsight you had known at the start, any advice that you would give to prospective architect clients?

The only thing would really be that it’s going to take a lot longer than you think and you’ve got to chill out. We were staying with people and we didn’t think we had enough time to actually rent something and in fact we would have had plenty of time to rent something so we stayed with my brother for a while, and that was a stress and a strain. I think the reality is expect it to take much longer than you think.

And I think maybe the other thing I would say is not to make lots of changes. At the end of the day if you like a design you’re better just to run with it. Unless there’s something that you really don’t like but you should be able to work that out fairly early.

Most importantly, why is it red?

It wasn’t our decision. I’m not a red person. I don’t particularly care for red. I rather like black but my problem is I’m constantly black, but when red was suggested, well, it’s perky and it’s got a certain charm and I like the idea of red with the tone of the bush around it. I think it was red because there are reds in the bush. And it is really quite lovely. 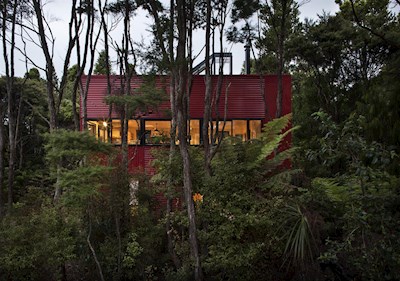 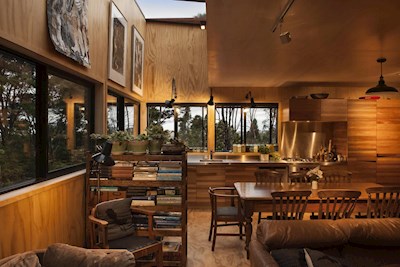 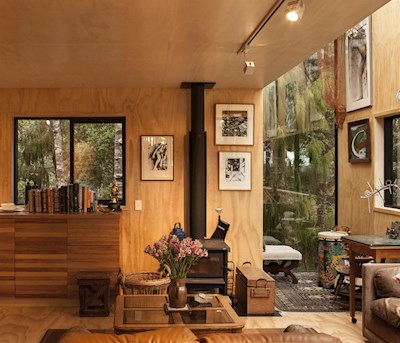 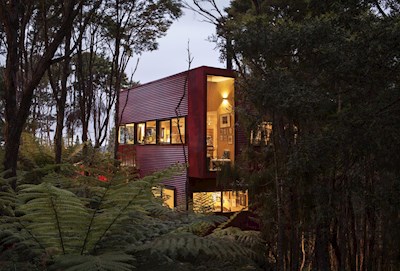 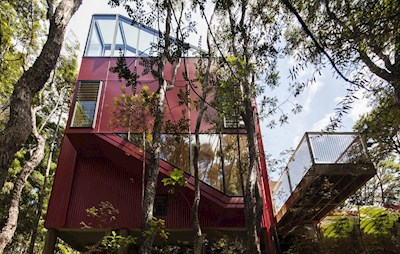