This essay by Craig Martin was highly commended in the open category of the 2018 Warren Trust Awards for Architectural Writing.

Craig Martin, a Nelson teacher, writer and photographer, writes about his memories of St James' Church, Mahora, in Hastings. 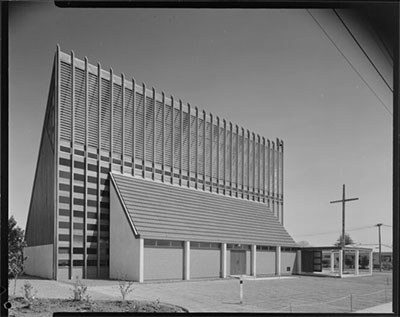 Our connections with architecture start somewhere in childhood, with our own constructions and discoveries. I explored the stables and barns at Mahora Stud Farm with my friend, Richard Gregory. We made hay-bale forts and Batcaves. We also tunnelled hideouts in the macrocarpa hedges and made mazes with suitcases and frayed blankets from the loft.

By 1950 the Hastings suburb of Mahora was largely complete, the last lots sold and built on after the war. The sections were quarter-acre and the houses practical and straightforward, designed by the builder or selected from a book of plans. On the side streets, there were State houses, without fences or gardens and built two by two. The streets running north-west have European names, Williams Street, Frederick Street, Duke Street, Fitzroy Avenue, St Aubyn Street, while those running north-east are Pakowhai Road, Ngaio, Tawa and Konini Streets and, further over, Tomoana Road and Karamu Road.

Just after they were married my parents built a modest two-bedroom house on Pakowhai Road, with a flat roof, stucco walls, a brick chimney and polished wooden floors. My father made the kitchen joinery with a red linoleum benchtop, to save money. He built a shed out the back, kept chooks and had a large vegetable garden. His building efforts also included a garage and sleep-out so the three boys didn’t have to share just one bedroom. Later came a pottery workshop and kilns.

The architecture in Hastings is modest: some of it from an earlier generation, or built after the Napier earthquake, orange tiled Spanish Mission and wedding-cake Art Deco, but much of it seems thin and token. Napier got the better architecture after the quake: businesses, banks and civic rebuilds – the National Tobacco Company, AMP Building, Ministry of Works. In Mahora, no architects were involved, except maybe in the State houses, from offices in Wellington. Mahora was too early for mid-century modern or for the new wave of young architects to emerge after the war. There are old villas, and Mahora School is a classic wooden colonial building, established in 1903. But I can’t recall a house on my childhood bike trips that was more than ordinary – maybe a few larger and grander, on corner sections and larger lots.

In 1960 the Anglican Church asked a 30-year-old immigrant architect, Len Hoogerbrug, to design a new church on the corner of Duke and Ngaio Streets. St James was built by the Hulena brothers at a cost of £21,250. I can’t remember it being built, except maybe concrete mixers pouring a floor or wall. I would have been seven or eight and on my way to George Fould’s dairy with a shilling, just around the corner from my home.

Len Hoogerbrug emigrated from Utrecht to New Zealand in 1951. He studied architecture extramurally from Dunedin before moving to Auckland to study full-time. At the time he designed St James he shared a practice in Hastings with John Scott and the church shows the exchange of ideas.

St James is striking, a geological fault thrust up from the depths of the ocean, like Te Mata Peak, steep on one side and sheer vertical on the other, with just a softer slope halfway down the cliff face. Along the building’s ridge, where beam meets beam, spines poke through the roof, capped in copper, like a monster from the sea – 29 of them, at 30-inch centres. But then, just to confirm this is a church, the last two spines are taller and a bell is hung between. Maybe the architect extruded the church through a die so that the entire length is the steeple, tall and sharp. And then Hoogerbrug has migrated the cross from the roof and planted it firmly on the ground at the entrance, protected by a rectangular frame.

My family went to St John’s Presbyterian Church on Frederick Street on the other side of the block. It was modern, designed by Martin Yeoman, and built in 1964, but it’s more conventional. I first went to a service in St James when I was about nine, with my Cub pack in our uniforms, green and red scarves and leather woggles. The service was much more formal than Bill Lindsay ran at the Presbyterian church. The Anglican priest wore a white gown with lace, and there was a choir and kneeling.

But inside, this was a church that a boy could relate to, with all the structure exposed, giant beams and metal plates bolting them together. You could make this church with Meccano, if only you had enough. It was like the hay barn at the Mahora Stud Farm where I played with Richard, climbing up the hay bales to swing off the rafters on a bit of rope. Strong, functional and geometric. And the light was the same, the barn full of cracks and gaps and spaces that let the light in, but filtered, with no view out.

Inside St James the eye is drawn up to the triangles of beams and the coloured light. The whole north-eastern elevation is a wall of light, a celeste of louvres and rectangular windows coloured or translucent white, filtering the light into the interior. And inside is surprisingly tranquil after the sharp edges outside, calmed by the wood and the coloured windows, the orderly pews.

Hoogerbrug’s plan is a simple rectangle. It has all the elements of a church neatly divided: the nave, the chancel, the sanctuary, the pulpit, the vestry, the altar, a font and a Bishop’s chair. But this is a church reimagined, reconstructed. John Scott’s Futuna Chapel, designed a few years earlier, is more geometrically complex but Hoogerbrug’s church distils the essence of Futuna, uses the steep pitch and triangular connections and the defused light, with great subtlety. It’s as if Hoogerbrug has deconstructed Futuna’s complexity and transformed it into a simpler and quieter form. While both share a connection with the barn and the woolshed, and with strong use of light, texture and contrast, Hoogerbrug’s church is perhaps more European, more Dutch.

These are the same materials Scott used in the Futuna: cast concrete walls to buttress the roof, covered in rough stucco, with softer concrete blocks to fill the external walls in between. The end elevations are a giant triangle propped on a low concrete wall, with a smaller triangle of coloured glass at the apex, each pane set in deep rectangular boxes, the yellow and orange in the larger frames and blue and red in the smaller. Narrow vertical cladding on the end walls re-emphasises the height. From outside, the lower roof that leans into the vertical wall is almost invisible, the eye distracted by the face that extends to ground level at each end, but inside, this lean-to gives the church its volume and makes the proportions make sense, like Third Form mathematics.

My architectural connections continued through childhood. A few years after St James, Hoogerbrug designed a house for family friends, Ray and Shirley King, on a gentle rise on their farm near Ongaonga. It too is a rectangular plan with a gabled roof, constructed with concrete block on a concrete pad, with exposed beams and chipboard ceilings, and a tiled roof. Then, in 1969, my parents asked John Scott to design a house and pottery on a 10-acre block 15 kilometres south-west of town. Scott used the exact same palette of materials but where the Kings’ house is straightforward and simple, in the Martin house Scott has cut up the rectangular form, separated and rotated it and then reconnected it with a whole new level of complexity. Yet both are satisfying, and right.

As a teenager I went to evensong at St James, probably inappropriately dressed and not paying much attention, then again as an adult to attend the funeral of Patsy Gregory, my friend Richard’s mother from Mahora Stud Farm. The church was full of bright white flowers and people I didn’t know. I sat at the back and thought what a wise and generous woman she was. And what a lovely community church it is.

Today St James is locked, quiet, a victim of earthquake standards and insurance costs. It is absent from the District Council’s list of heritage buildings. But this is my architectural heritage, my first contact with real architecture, a wonderful building in my neighbourhood.

Read this essay and nine others in 10 Stories: Writing About Architecture / 4 available for $15 + postage in the NZIA shop.