Of the 90 essays submitted into the 2016 iteration of the Warren Trust Awards for Architectural Writing, 10 were published in the second edition of '10 stories: writing about architecture'.

The writing competition was launched in 2015 by the New Zealand Institute of Architects, with the support of the Warren Architects’ Education Charitable Trust, to promote and acknowledge longer-form writing about architecture. The competition has two entry categories: open, and secondary school. Winners are decided in both categories, and highly commended awards may also be made; in 2016, three such awards were granted.

The winning essays in each category of the 2016 Warren Trust Awards for Architectural Writing, as well as the three highly commended essays, are published in this book, together with five other essays selected by the book’s editor. As with all the pieces entered into the competition, the essays are responses to the topic: ‘Write about a journey you have made to an architectural site – it could be a new building or an old one, a town or city, or even a ruin. Explain why you went and describe what you found, and what it means to you.’

The Institute of Architects thanks all those who entered the 2016 Warren Trust Awards for Architectural Writing, and encourages anyone interested in the craft of writing and the subject of architecture to consider entering the competition in the future.

Read this essay and nine others in 10 Stories: Writing About Architecture / 2 available for $15 + postage in the NZIA shop. 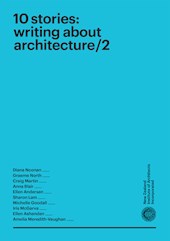