From 'Transcendent Site', by Roger Wilson, winner of the 2011 Student Design Awards.

Roger Wilson, from Victoria University of Wellington, is the winner of the 2011 NZIA Graphisoft Student Design Awards with his project 'Transcendent Site: The Resurrection of Denniston'. Transcendent Site: The Resurrection of Denniston

Description: An application for resource consent – since granted – to resume coal mining, after a 50 year hiatus, on West Coast’s Denniston plateau, prompted Roger Wilson’s proposed resurrection of the derelict town of Denniston. Drawing on heritage photographs of West Coast coal mining settlements, and visits to Denniston and other mining sites in the region, Roger developed a typology of industrial forms and ruins. The revived township is conceived of as an extension of the mine. As well as providing accommodation and services for the mine workforce, the proposal anticipates tourist activity – Denniston was once famous for its Incline, a precipitous railway track locally celebrated as the ‘eighth wonder of the world’ – and agricultural production.

Citation: Transcendent Site is an utterly engaging and evocative world. The reconstituted town of Denniston works at all levels – from the historical and the environmental, to the scale and arrangement of buildings and social spaces, from the public apparatus of the town to the domestic scale of rooms and their fittings. An innovative and original proposal. We’d like to go to this town – at least for a visit.

Min Tian
University of Auckland School of Architecture and Planning Apidaetopia: the Co-Evolution between the Born and the Made

Description: Min Tian’s scheme posits a positive role for architecture in biological conservation. Her Apidaetopia (from apidae – bees, and utopia – a perfect or ideal place), is a refuge for honeybees – one of Earth’s keystone species – sited above a quintessential, and rather unpromising, man-made environment: a Shanghai freeway. Constructed of fibre-reinforced plastic lumber, a recyclable material, and photocatalytic concrete, which has depolluting qualities, the ‘apidaetopia’ would function as an ‘urban bee resort’. Humans would be free to observe but, for once, not exploit another species.

Citation: Apideatopia sets up an engaging and plausible contemporary scenario which deals with both urban and environmental issues. It takes a serious ecological construct and successfully grafts it onto an existing urban ecosystem. The scheme serves polemical and environmental purposes. It repurposes a freeway structure to allow some human engagement with a species that has enabled human survival. 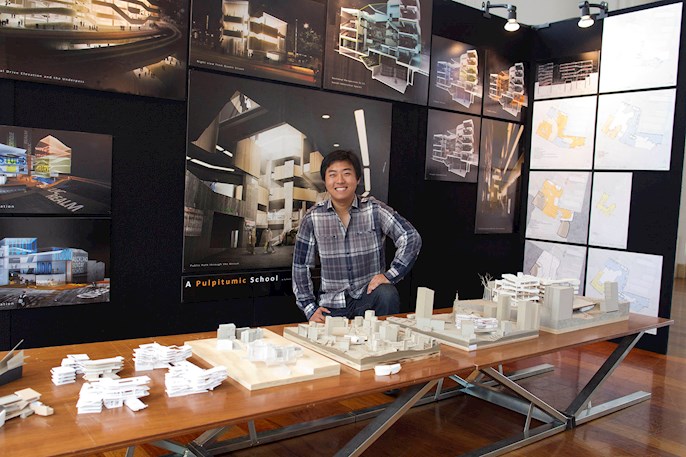 Description: Pulpitumic (from pulpitum – a podium) School is, as its name suggests, both academy and symbol. Taking a city block as his site, Erxin Shang proposes a School of architecture which would function as a teaching institution, a work of civic integration, and a vehicle for projecting architecture into public consciousness. The guiding principles are connection and engagement: of building with site; students with subject; gown with town. The School would, in a sense, walk the architecture talk.

Citation: Erxin’s design is for a publically engaging School of Architecture in Auckland’s Town Hall precinct. Pulpitumic School is a highly articulate urban contribution which completes a city block. A series of interlocking spaces which are skillfully crafted and resolved both internally, externally, and between the new buildings and existing fabric. The volumetric composition is sophisticated and synthesises all the architectural elements into a convincing whole. 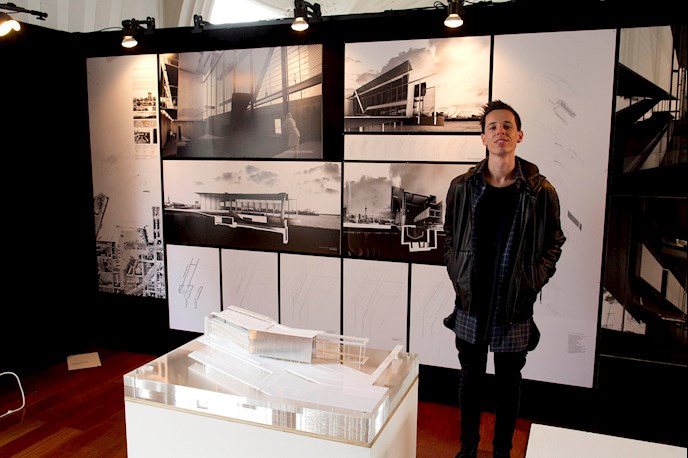 Description: Around the world, the urban waterfront is now a prized development site. What role do traditional maritime industries have on the contemporary waterfront, and how might a port’s industrial heritage be acknowledged? Nick Adams responded to these concerns in his proposal for a waterfront building in which the public can watch ships being made and repaired. The scheme encourages public passage, both above ground and below sea level, through the shipyard building, the core of which is a 60m x 17m dry-dock.

Citation: This proposal for a functioning shipyard on Wynyard Quarter explores the potential for industrial architecture as a type of public space and acknowledges the contribution of industrial activities to the public realm. 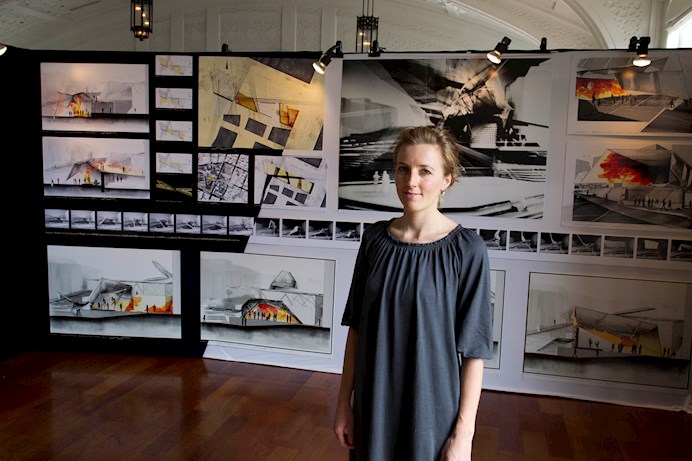 Description: Most architecture is concerned with the design of the static object, but Tess Fenwick’s proposal is for an architecture of movement. The scheme pursues kinetic strategies to improve the spaces in an inner city site. The vehicle for this transformation is a system of hinged roof planes, which adjust to reconfigure spaces according to use requirements, people movement, and climatic and seasonal conditions. Spatial adaptability is the goal of this mobile architecture, which contrasts with the normal ‘one size fits all’ built form.

Citation: Tess’s entry is for a building on Auckland’s urban Rhubarb Lane site. A kinetic structure, admittedly dependent on the liberal use of that elusive material, ‘unobtanium’, creates lively and legible public spaces. Doorway to the Built Environment

Description: Sophie Hamer’s design seeks to remake a Wellington square, located between Lambton Quay and Queens Wharf, as a more engaging and comfortable place – a space that would prompt and facilitate architectural discussion. The goal is to both connect the site to its broader environs, and to disrupt the traditional boundaries between inside and outside. The building, conceived of as a site rather than a destination, is literally a framing device for activities – meetings, exhibitions, presentations – and a vehicle to promote public discussion of architecture.

Citation: Sophie’s design reconfigures Wellington’s Post Office Square into a place that follows the topography and engages the public. Her ‘doorway’ explores techniques for dissolving the architectural object into passage, frame and background.

Jessica Mentis
University of Auckland School of Architecture and Planning 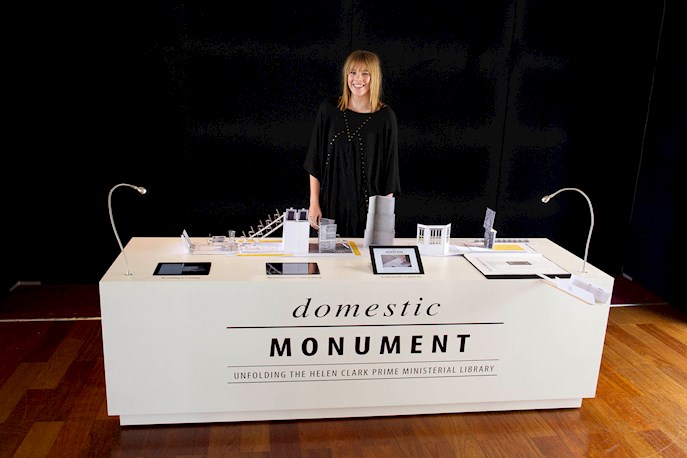 Description: ‘If architecture were to “author” your story, how would it “read”?’ Fusing architecture and literature Jessica Mentis designed an ‘architectural novel’ which serves as a domestic monument’ to the legacy of Helen Clark. The book, which sits on a customdesigned table, is a work of paper architecture in the tradition of Brodksy and Utkin. It unfolds to present elements of domestic architecture to build a story about the life of New Zealand’s first elected female Prime Minister, whose domestic circumstances were the subject of considerable media prurience.

Citation: Jessica’s entry explores the possibilities of transporting the U.S. tradition of the presidential library to New Zealand in a novel way. An exquisite and highly crafted investigation of architecture as narrative. 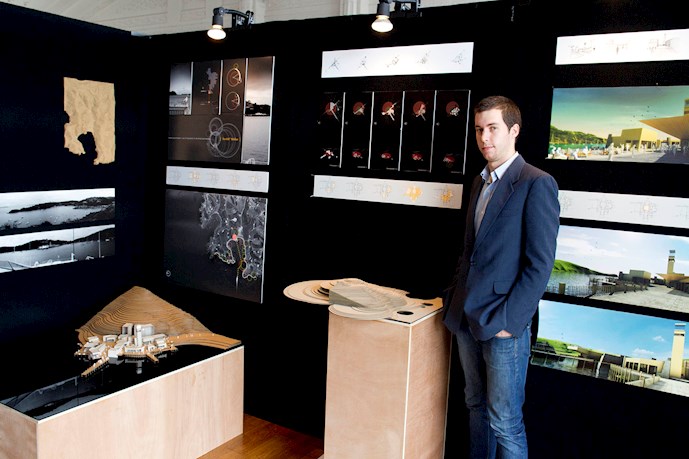 Description: The proposal for a ferry terminal on Matiatia Bay in the Hauraki Gulf expresses Warren Nicholson’s belief in the importance of geometric considerations in architectural projects. The scheme, produced after its author mapped the edges of the bay, draws on Frank Lloyd Wright’s architecture, and also Christopher Alexander’s principles of good design. The goal is to design spaces that are ‘held’ by the surrounding and adjacent spaces and that engender in occupants a sense of ‘centredness’.

Citation: Warren’s proposal is centred on the land around a ferry terminal on Waiheke Island and informed by an investigation of the geometries of Frank Lloyd Wright. An urban centre is created out of fragmented public space. 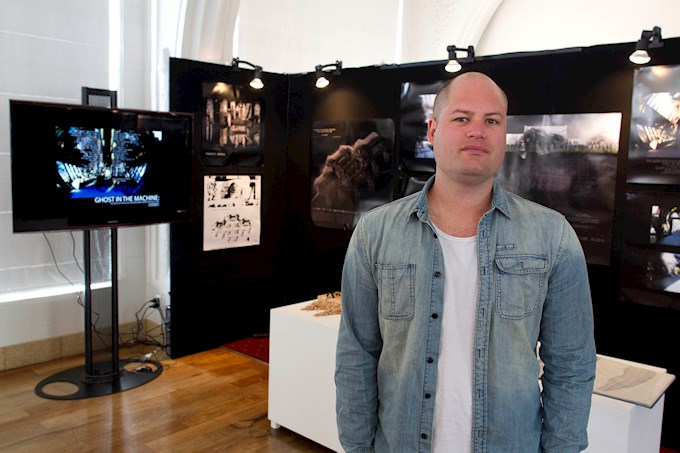 Ghost in the Machine: The Role of Ritual in Contemporary Maori Architecture

Description: Te Ari Prendergast’s project, ‘Ghost in the Machine’, is a proposal for a carving school in the damaged cityscape of postearthquake Christchurch that would, through the architecture of the building and the craft skills imparted within it, connect displaced youths with their Maori heritage. Taking inspiration from the traditional Whare Whakairo, or carved meeting house, which safeguards and communicates stories, the building program is articulated as a ritual progression which moves from the past – an acknowledgement of ancestors – to the present and the ‘world of light’.

Citation: Te Ari’s design for a carving school on a swamp landscape in the middle of the Christchurch Red Zone communicates a deeply felt engagement with the site and
its history. The scheme is testament to the restorative role of carving – in both a physical and a social sense.

Raukura Turei
University of Auckland School of Architecture and Planning 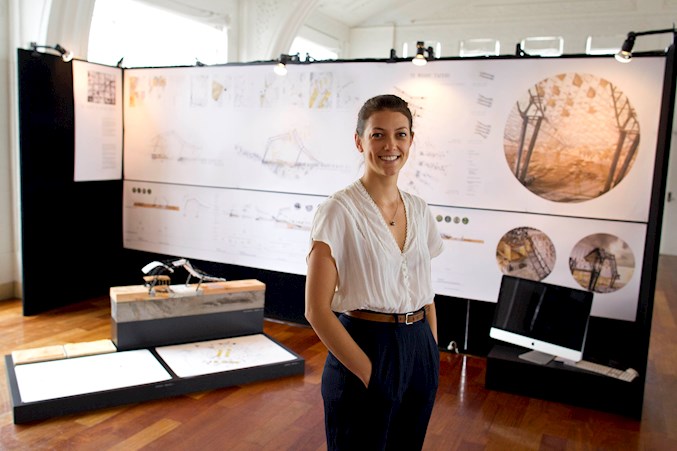 Description: Named for an episode in an ancestral narrative featuring a female dance troupe, Raukura Turei’s project proposes a temporary space for traditional and contemporary Maori performance arts. The hybrid steel and timber structure, with its intricate, mechanised roof structure, expressive ceiling panels, and acoustic elements, could be transported to and erected on any green site to accommodate seasonal events. The intention is to produce an immersive architecture that engenders a sensation of the dissolved state of sky and ground.

Citation: Raukura’s proposal for a movable structure for Maori performance arts is a well-researched, innovative and beautifully presented investigation into the possibilities for the contemporary realisation of pre-colonial architecture and performance arts.Yunwei Xu

University of Auckland School of Architecture and Planning 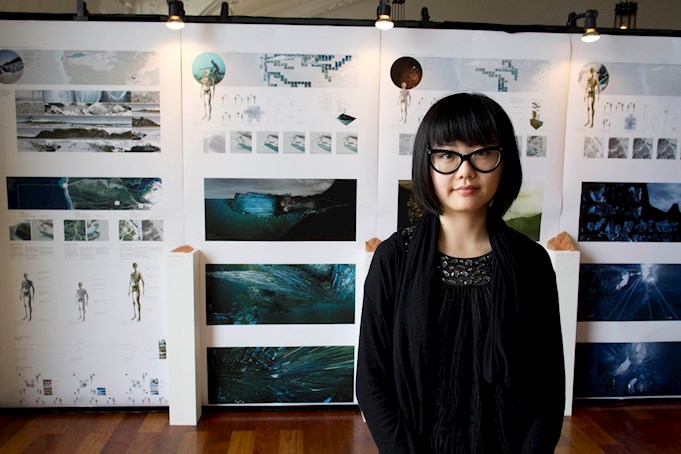 Evolution of an Anthropogenic Catastrophe

Description: Yunwei Xu’s proposal envisages an environment devastated through human agency. On a planet reduced to a primitive state, three social scenarios play out in and around New Zealand’s southern alpine region. Humans organised as ocean dwellers, subterranean dwellers and snow dwellers seek to adapt to their precarious ecologies and preserve their inter-dependent societies. Architecture, in this scheme of things, is not about building, but assembly; not about form making, but the careful fusion of the natural world with what is left of the human world.