At the 2017 Wellington Architecture Awards, announced at Amokura Gallery, Te Papa Tongarewa, on the evening of Wednesday 17 May, 24 awards were handed out to a wide range of successful projects.

Alistair Luke, the Wellington awards jury convenor, said the refurbished building, which is at the heart of a wider civic upgrade for the council, was a “delightful and civilised public environment” and a clear highlight at this year’s awards. Luke applauded the way the architects had “embraced the heritage values of the existing HCC building of their own volition”, and the confident way in which a parallel annex and new light-filled atrium complemented the existing structure.

“The project is an exemplar of heritage being recognised for its value, while not being slavishly adhered to,” he said. “It is a triumph for that but, combined with all else, the incredible complexity of the realisation is remarkably seamless.”

A number of awards were also conferred upon other practices undertaking the challenge of upgrading heritage buildings for modern work or lifestyles.

Architecture+ received a fourth award for the design of its own studio, a “clever fitout within the historic Odlins building”, while Architecture Cubed’s “timely and sympathetic” refurbishment of the renowned Centennial Flats has seen the Heritage-listed buildings returned to their former glory, Luke said.

Warren and Mahoney Architects successful awards night began with an interior award for its Intergen fitout.

“This fitout of a former printing press building neatly picks up on the original industrial aesthetic and transforms it into a compelling modern office environment,” Luke said.

Warren and Mahoney also received a commercial architecture award for the Terrace’s Aurora Centre, a significant project that “impressively solves the challenge of unifying two disparate existing buildings into a cohesive whole”.

“It makes a very positive contribution to the broader urban context while satisfying the demanding needs of a large-scale government ministry,” Luke said.

Warren and Mahoney’s third and fourth awards, for commercial and interior architecture respectively, were for the southward extension of the terminal at Wellington International Airport. Despite difficult conditions, the extension’s full-height glazing and diagonal lattice of laminated timber “creates a transparent conclusion to the terminal”. The judges were also impressed by the way the extension carries its own identity without jarring with the pre-existing building.

Designgroup Stapleton Elliott received the first of its awards for WelTec School of Construction, “a direct but very clever response to a very specific brief with a tight budget”, Luke said.

Studio Pacific Architecture, another well-established Wellington practice, received its first award for a major upgrade to the former William Clayton Building, in Thorndon – the first office block in the world to use lead-rubber base isolators for seismic protection. The client’s brief for 133 Molesworth Street, as it is now known, required the lettable area to be doubled, a rationalisation of space to allow modern open-plan environments and a significantly enhanced street presence.

“The previously recessive forms are now a powerful, lineal presence of folded white spandrel panels and dark glazing that evokes speed when seen from the motorway,” Luke said. “This extremely challenging project has been very successfully realised.”

Studio Pacific’s second award was for a fitout for the Ministry of Social Development. The jury praised the way that the architects made “difficult floorplates work very well”, and the way “expressive finishes and colourways that distinguish the floors and create clear orientation”.

“It signals an alternative to the profligacy and sprawl that are otherwise undermining our urban and suburban environments.”

First Light Studio’s Wairarapa Hay Barn is a “wedge-shaped” house that picks up on the rural shed forms. Luke described it as a “liveable, warm and harmonious home that is clearly perfectly pitched to its owner’s needs.” 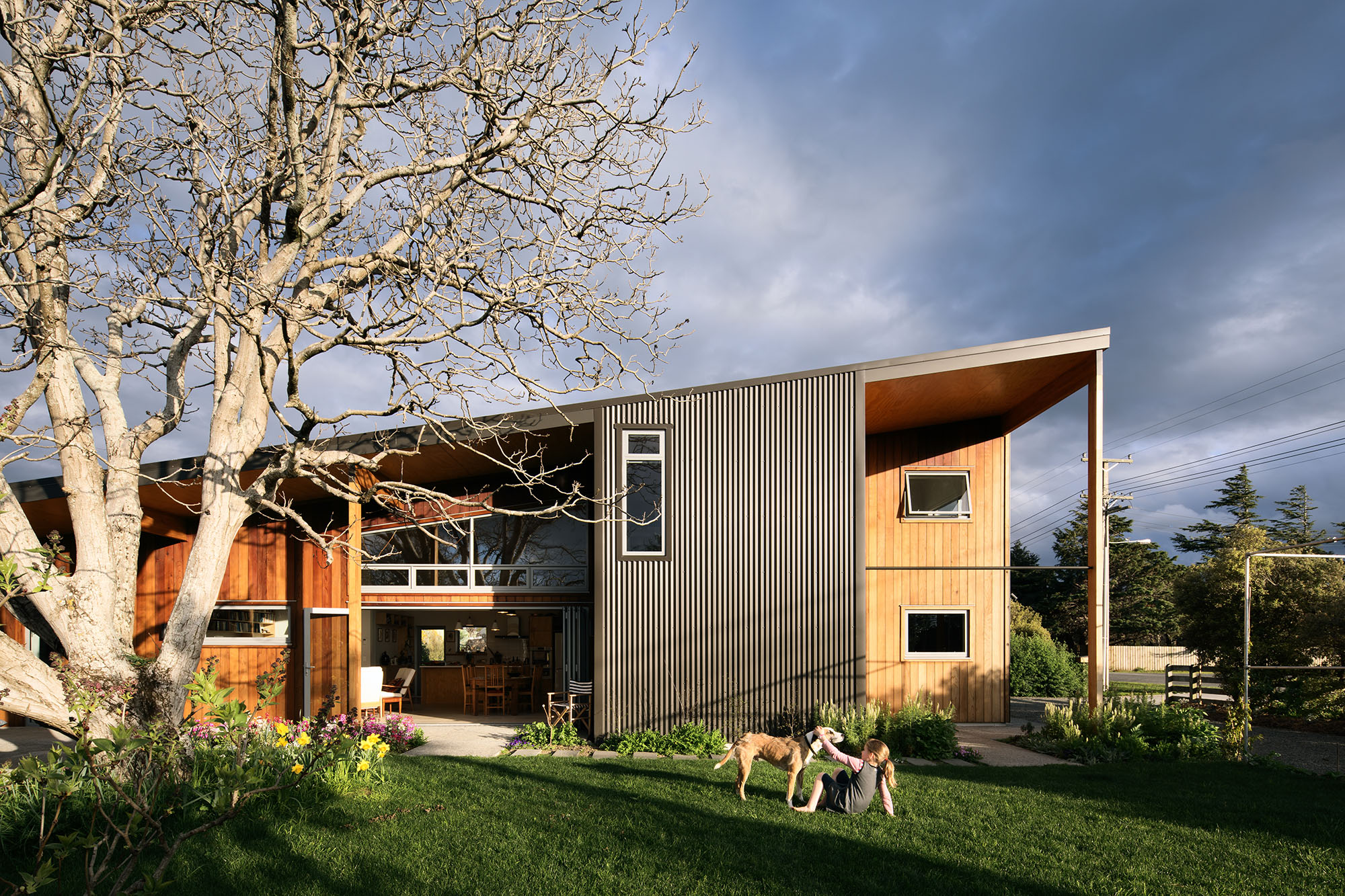 Eight awards were given this year across three housing categories, with the jury especially impressed with two small-in-size renovations to compact older houses.

Of Mary Daish Architect’s Mount Victoria House Alteration the jury said: “Attention to the nuances of occupation, anthropometrics and the craft of making makes this contemporary addition to the existing villa a delight.”

Luke said Tennent + Brown Architects’ Home of Compassion Sisters’ Housing was a “charming collection of homes that employs a restrained composition of materials, with their scale and humanity articulated externally via a switching angular roof”.

He also said that the Kotuku Flats Upgrade by Opus Architecture was an “exemplary” upgrade to a very utilitarian and dilapidated base of existing bedsit apartments in four blocks.

“This is a truly outstanding example of a little being made to go a very long way in a critical housing sector.”

In the housing category, Luke described Novak+Middleton’s Vineyard House as a “low slung pavilion-like house that responds to the client’s wishes for a modernist expression with minimalist detailing and expansive views to its site and beyond”.

Herriot Melhuish O’Neill Architects Waikanae House appeared to be a simple composition of boxes, but upon entering and moving through it, the jury found “subtle complexities and a deft handling that responds to the site and the client needs”.

Kirkway House, Designgroup Stapleton Elliott’s second award winner, sits “purposely on an elongated seafront section”, the jury said. The texture of the home, which was derived from the use of zinc shingle “scales”, shuttered concrete walls and timber, was also appreciated by the jury.

The Awarua Street Residence, by Foundation Architects, was a clever response to Wellington’s sometimes challenging topography.

A particular highlight for the jury this year was seeing the two projects nominated for enduring architecture awards, which are given to projects more than 25 years old that have withstood the test of time.

“Both are remarkable works – and both highlight the fact that the passage of time doesn’t dull the brilliance of original design thinking,” Luke said.

The Uren House, designed in 1965 by architect Reg Uren for his brother Ron – and the only house the architect designed – was on project honoured. “The genius of this enigmatic house matches the enigma of its architect,” Luke said. “This is one of New Zealand’s finest modernist residential works, surpassing in composition and detail many that are better known.”

Resene Paints has been a proud sponsor of the NZIA’s awards programmes since 1991.

The Aurora Centre by Warren and Mahoney

Ministry of Social Development Fitout by Studio of Pacific Architecture