In early December 2016, Melonie Bayl-Smith was the international juror at the 2016 NZIA Central Innovation Student Design Awards. As is customary, the visiting juror presents a small lecture at the awards prize-giving. A transcription of Melonie's presentation follows.

Thank you for the warm welcome – it is a real pleasure and honour to be here to judge and present the 2016 NZIA Central Innovation Student Design Awards. It wasn’t difficult for me to say yes to the invitation to be this year’s International Judge as my passion for architecture and for promoting our future architects is well known.  Before I start into the few words I would like to share, a round of thank yous –

Thank you to Teena, Cathie, Michael and the NZIA for inviting me to be the International Judge for this year’s awards – you have been most excellent hosts.

Thank you to my fellow judges – Christina and Stephen. It has been an absolute pleasure to share the responsibility of judging this year’s award entries with you.

There would be no award to judge without the entries nominated by the three NZ schools of Architecture and I therefore thank all the students who presented their works over these past two days. The diversity of projects and design approaches has revealed a richness of talent emanating from the NZ schools of Architecture and it was a privilege to hear from and meet all of this year’s award nominees.

Lastly, I wish to make special mention of the many people who have contributed to the development and education of these twelve nominees. Their parents, partners and families, their teachers, tutors,  lecturers and  professors, their employers, their friends and their peers. Architecture IS a discipline, … in the truest sense of that word – it requires rigour, commitment, talent, perseverance, mental agility, and a deep desire for lifelong learning. Most of these traits are not fostered without the encouragement, love and/or mentorship offered by those who care about the future of these students and the future of the architectural profession.

And so, the future.

To talk about the future, I’m going to jump back almost 19 years and tell you a personal story.

In 1998, my first job as a newly minted graduate of architecture was with a busy, somewhat progressive medium sized practice in Newcastle. Owned and headed up by sole director, this architect who had a reputation for being fiery of character and for throwing epic tantrums – behaviour that was often excused by his apparent status as an ‘award winning design genius’.

There was no doubt his personality was divisive in the office – it seemed that people either worked with him for years, or they left the practice shortly after commencement. As there were not many architecture jobs going around in Newcastle, and moving to Sydney was not an option at this time, I decided I would make the best of the position I was offered, especially given my cash-strapped post university predicament!

Being the hyper-diligent distinction student that I was, I asked lots of questions to ensure I understood what was expected – because even if one has worked in practice as a student, navigating the practice of architecture as a graduate can be quite the daunting prospect. I made a solid effort every day and was committed to the projects to which I was assigned, regardless of how boring or repetitive the tasks I was given might have been. Putting my best multi-tasking skills to use, I balanced competing deadlines and new projects with learning the CAD software in use “on the job” – because this it was a different CAD package from the one I had learned at university.

And yet, these efforts all came to nothing – because less than two months after starting work, and with absolutely no warning whatsoever, I found myself being most unceremoniously fired by none other than the part-time office manager, who delivered a shopping list of my failings written out and handed to her by the director. My boss or team leader were nowhere to be seen.

The reasons? My asking of questions.

Rather than being a sign of diligence, of interest, or of a desire to get things right - was perceived as a sign of stupidity and ignorance. I was a total time waster. Apparently, nobody had time for me. And for good measure, just to stick the knife in a bit further, I was told I clearly had no idea about geometry or form and because of this, I would never make it as an architect.

Considering my published and award winning projects produced since, oh how I would so like to take my former employer to task on his judgements! Whatever you say, buddy. I sound bullish about this now, 19 years later. But at the time I was shattered. I thought I had no future.

So what kept me going, pushed me out of that pool of despondency and failure in which I had been dumped?

1. the disposition to hope for the best; tendency to look on the bright side of things.

2. the belief that good ultimately predominates over evil in the world.

It’s likely that we all agree that optimism is probably the greatest human attribute. Maybe it’s optimism that really keeps us alive and, well, human.

It’s also something that characterises us architects – in our actions and pre-occupations - because it is an innate part of what drives us every day, regardless of the inevitable challenges and oppositions. As Norman Foster has almost too obviously stated ‘If you weren’t an optimist, it would be impossible to be an architect.’

Why? Simply put, our work as architects is principally concerned with envisioning and enabling the future. And not just any future, but a better future, regardless of the scale or culture, the place or context, the budget or the client.

In the present moment, it can be truly challenging to see a better future ahead for our world. The events of the past decade, this past year, even just this past month could easily convince us that we have completely lost our humanity, or close enough to it. However, I believe that architects, architecture and its allied disciplines have a significant role to play, along with many others, in perpetuating and manifesting hope and optimism in our societies, our communities, our daily interactions with each other.

This is not based on a blind optimism, like a Pinterest pin about ‘positive thinking’. Optimism is also not about the starchitect or some notion that we are the Master Creators – we are not and should not be building utopias. Rather, I believe we can rediscover and express our collective optimism and resilience through small gestures, through everyday empathy.

To illustrate, I’d like to tell a story about a window. It’s not a very exciting looking window. It doesn’t have an expensive view like many Sydney windows. But this window is slowly transforming a community. 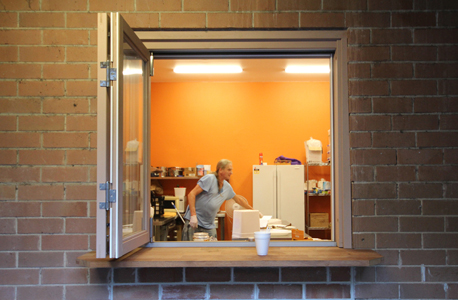 This small, yet critical gesture, is a key mechanism for a new commercial grade kitchen serving as a “soup kitchen” run by our clients, St Saviours Church in Redfern. This congregation inhabits a historic Blacket church and is situated across the road from the Waterloo blocks – a housing commission flat building complex generally known as a cesspool of despair, abuse and addiction.

The church won a small grant from the local Council to build a new kitchen to assist in improving their community outreach program. Using food from OzHarvest, a charity which gathers unused food from restaurants and cafes, the program provides meals and distributes fresh food packages every week.

Before building the new kitchen, our clients were delivering this food program out of the entry foyer of the church. Somehow, with two powerpoints, an outsized donated coffee machine and a couple of wobbly tables, they had built up a regular patronage of about 25 locals visiting for food, assistance and conversation.

With the Council grant, a small additional amount raised by the Church members, and a whole lot of optimism, we masterplanned and detailed the full kitchen facility. The church demolished their tiny and utterly decrepit kitchen located in the existing church hall, useful items were recycled, and the builder built whatever could be afforded of the new kitchen fitout.

But even when funds were running out, the new window remained in the project. The window – its opening and threshold - is a vital connection to the community outside the four walls – that someone uncomfortable with entering the church hall can still benefit from the food program and begin to build relationships, one by one.

In the three years since completion, those participants directly benefiting from the food distribution program has grown from 25 to more than 80 people. This physically very small project has been published extensively and won awards, including the Urban Commons Foodscape prize, resulting in the delivery and installation of a modular garden and seating system. This installation activates the existing courtyard connecting the kitchen, hall and church buildings, allowing participants to be involved in cultivating edible and garden plants, reinforcing positive opportunities in the local community.

The relationships and programs built up by the activation of this once dead courtyard space and non-descript church hall has created a place to eat and be social. The social interaction aspect is very important, because so many of the people who come to the ‘soup kitchen’ live on their own and do not participate in the café lifestyle we take for granted.

So when I think of optimism, and how an optimistic trajectory empowers architecture, I’m thinking of how architecture facilitates better things, better places, better use of our resources and environment. From understanding and seeing what doesn’t work, by thinking through the problem via conversations, drawings, designing, modelling, technology and construction, we can communicate, create and facilitate a way forward.

A window can change a community.

To conclude, I want to reflect on my recent trip to the World Architecture Festival (WAF) and the Venice Architecture Biennale. Attending these two globally focused events within the same week was nothing short of illuminating. For one, it was clear that regardless of place and context, architects face endless challenges and yet remain astonishingly resilient and optimistic about the future, a way forward. This was encouraging – for although there were many narratives of difficulty, prejudice, political machinations, loss, war, crises and disaster that had preceded the propositions and projects of these numerous architects – optimism remained.

One of the most interesting conversations was at the WAF between Peter Cook of CRAB and Archigram fame, and Wolf Prix of Coop Himmelblau. Whilst I admire projects by both of these architects, I could not suppress my inner cynic – what could these two old white men say that was new, that was not going to simply leverage their many layers of privilege?

But then the conversation began. They both talked of their projects, but by and large there were absolute gems, with Cook stating that as a profession, we need to cheer on “the talented and the bold” – that there needs to be room for “stupidity and delight”. And then Prix, when asked What is Architecture, firmly answered “Architecture is YES!”

Such enthusiasm resounding from these two architect elders! There was no doubt that their sentiment was seated in an optimism for the whole profession.

Clearly architecture needs to be about the YES, because saying Yes is a response – an acknowledgement of a challenge, an opportunity, a conversation.

And as architects, our yes must be people centred, thinking of the now and the future – of what has been, and what will be inherited.